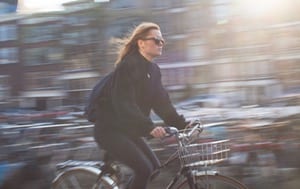 Unfortunately, car accidents involving bicycles are rather common in Oklahoma City. For one, Oklahoma City does not have enough sidewalks, which puts many pedestrians on the road. Bicycles are supposed to be on the road, but motorists do not always like sharing the road with cyclists.

Regardless of the preferences and attitudes of those driving cars and trucks, bicycles are perfectly legal modes of transportation in the city, which means motorists must yield to and share the road.

Defining the legal rights of those using the road in Oklahoma

Oklahoma law defines Right-of-Way as “The privilege of the immediate use of the roadway.”

A Bicycle is legally defined as any device that is powered solely by human motion and effort.

When riding a bike, you have the same rights on the road as those driving motorized vehicles. But you also are bound to follow the traffic rules exactly the same as a motor vehicle. See Title 47, Okla. Stat. §11-1202.

There are many more rules regulating bikes on the road. Perhaps too many, you might say. But why all the rules and what’s the point?

All of this goes to show that bicycles are valid forms of transportation and the law treats them as such. Operators of bicycles are treated no different than drivers of cars. Both must follow the rules of the road.

The only rule that could be said to restrict cyclists from normal driving would be Section 11-1205 which requires bicycles traveling at a speed that is slower than the pace of traffic to ride as close as possible to the right hand curb, and may veer away from the curb only for a handful of reasons, such as making a left-hand turn into a driveway or passing a vehicle, or approaching an intersection to turn left (and to avoid hazards and such). But that’s basically the only rule that treats bikes different than cars.

So if driving a bike is no different than driving a car, then drivers of both vehicles have a duty to look out for the other and take reasonable precautions to prevent accidents.

How to Pass a Bicycle on the Road

There is actually a law on this in Oklahoma.

When overtaking and passing a bicycle proceeding in the same direction, a person driving a motor vehicle shall exercise due care by leaving a safe distance between the motor vehicle and the bicycle of not less than three (3) feet until the motor vehicle is safely past the overtaken bicycle.

The next subsection further provides that if a driver breaks this rule and causes serious personal injury to the cyclist, that driver shall be subject to a $500 fine as penalty. If the driver causes death, then the penalty is increased to $1000.

(These are simply traffic violations that the government issues. None of this prohibits an individual from filing a personal injury action or a wrongful death lawsuit for a much greater amount of money).

Injuries to Cyclists from Motor-Vehicle Wrecks

Injuries from bicycle motor-vehicle collisions can be traumatic. The cyclist does not have the benefit of a large vehicle chassis to absorb the collision.

These wrecks can be deadly. Non-fatal incidents can still cause traumatic brain injury. Broken bones, considered a serious injury in car accidents, are something of luck if that is all that is sustained in a bicycle-auto collision.

Because the injuries are magnified in auto-bicycle collision, the compensation deserved is amplified.

Obtaining Just Compensation for your Bicycle Accident Injuries in Oklahoma

If you have been injured in an auto-pedestrian or auto-bicycle collision, call the office of Travis Charles Smith at (405) 701-6016 for legal representation.

Travis is dedicated to every case he takes and is relentless in obtaining just compensation for those injured in these types of accidents. For a free consultation, call today or send us an email. For those with serious injuries, Travis will save you the trouble of coming downtown and will instead come to your home at a time most convenient to you.