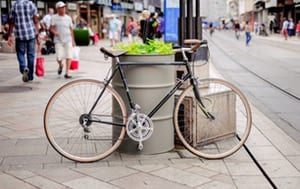 The following essay is my observation about how we have, intentionally or unintentionally, favored vehicles over pedestrians in the development of our city, and how that has resulted in more cars, more traffic jams, less walking, and unfavorable attitudes toward those that do choose to walk or ride a bike on the roads.

The biggest problem is that expansion of roads and suburban design further discourages walking and cycling and makes people even more dependent on vehicles, which in turn puts more cars on the road and causes more traffic jams.

Let’s end this cycle. We created it and we can change it.

Our Attitudes toward Pedestrians and Bicyclists in Oklahoma City

It’s unfortunate that in places like Oklahoma City, many view bicyclists as an annoying obstruction to their use of the roads via automobile.

And yet, at the same time it’s very easy to understand how most motorists could feel this way. I mean, here you are, driving along, trying to get to where you’re going, and all of a sudden you come up on a guy riding a bicycle. Now you have greatly reduce your speed, and begin looking for opportunities to pass this cyclist so that you can resume your normal speed, about 20-30 mph faster than what the cyclist was going.

This entire episode took about….. less than a minute of your time.

Now that I write that out, it actually seems less understandable. But I’m someone who doesn’t like to be interrupted, so I can at least empathize with the disgruntled motorist who had to take a minute to deal with passing a cyclist.

Analyzing the Evolution from Walking to Driving

Let’s explore how it could be that our attitudes toward something like walking or biking down the street have gone from “oh, there’s a person doing something completely normal” to “Damn it, there’s a person hogging the road, get the hell out of my way!”

Oklahoma City was settled in 1889, and Oklahoma became a state in 1907. In those days, people got around town by walking or by horse-driven carriage. So streets and intersections were designed around the free standing human being, who would need to be able to walk from street to street, building to building, to get around.

Note the popularity of the Plaza District, the Paseo, NW 23rd Street Corridor and Midtown. Why are these areas so popular? Why is every downtown in every major city popular? Because those areas are focused on people, not vehicles. Urban areas are fun and enjoyable precisely because a person can walk or ride a bike. A person can navigate the intersections and alleyways by foot or bicycle in a more efficient manner than by vehicle. All of the shoppes and buildings are close together, inviting one to walk rather than drive.

Mid-Century Emphasis on Designing Cities for Vehicles instead of Pedestrians

But other than the development of what we now refer to as the urban core – downtown, midtown, capitol hill, and the inner surrounding neighborhoods – most of the larger Oklahoma city was developed and expanded in the mid-twentieth century, after the automobile became the dominant form of transportation. This is unfortunate, because all subsequent development was centered around vehicle traffic instead of human traffic.

Why is car-centered development unfortunate? Because pedestrian-centered urban areas are what people really desire.

What if the entire city was designed that way? Designed around being able to shop, eat, and hang out, all on foot or bike.

Ideally, all cities and neighborhoods in every city would be designed in this fashion. But unfortunately, that is not the case. While most cities throughout history across the globe were designed with the walking human being in mind, many cities in the western United states were not.

By the middle of the twentieth century, many city planners sought to make cities cater to vehicle traffic as opposed to making the city cater to the people. Instead of assuming that most people would prefer to walk or bike through their neighborhoods to the store, city planners prioritized making new development convenient for the vehicles.

All this did was make people even more dependent on driving for every possible errand which in turn puts more cars on the road, and makes the streets more crowded than if people were walking and biking.

The Consequence of Suburban Sprawl: lots of parking lots, lots of concrete and asphalt, and lots and lots of vehicles dominating the roads

All of North OKC and Edmond is segregated into neighborhoods with one or two entrances, then commercial areas with a handful of stores and a giant mass of parking lots. Keep traveling and you then might see another segregated area of apartment complexes. Each of these areas might take up an entire square mile. A house may be situated in one of these neighborhoods, and one must walk a full mile before exiting. Then it’s a half-mile down to the stop light where the first commercial store – a gas station. Then it’s a full two miles to the next commercial area – perhaps a shopping center containing a Walmart or Best Buy, a handful of other retailers, and then a few chain restaurants, with gigantic parking lots separating all of these buildings. From an aerial view, the entire complex is huge.

All of this discourages walking and biking, as you have to go five miles just to get from your house to the nearest store or restaurant.

Compare this to the older neighborhoods, where a gas station or quick mart may be a short walk from literally anywhere, and a strip of cafés and restaurants may be just a little further. Parking is a drag and there is never a parking spot in site, but if you live nearby, walking or biking is no problem at all.

Changing our attitudes toward pedestrians and bicyclists

What does any of this have to do with bike safety?

It’s because we have conditioned ourselves to be annoyed with pedestrians and bicyclists, because we view those folks as getting in our way; slowing us down, as we are in a hurry, driving our cars. Instead, we should be allowing them to take all the time they need to cross the street (it’s not that long in the grand scheme of things). We should acknowledge that it usually only takes mere seconds before we are able to change lanes to pass a bicyclist.

Traffic jams are caused by vehicles, not pedestrians and cyclists. The answer to traffic jams is less drivers, not more.

Regrettably, many people are injured every year while walking or riding a bike by drivers not paying attention while wielding three thousand pound chunks of metal. Ironically, I have noticed that insurance adjusters tend to fight these claims, looking for angles on how they can blame the person walking or cycling instead of the motorist who ran them over.

Cars and trucks are these amazing mechanical devices that can take us to places very far away in a short amount of time. Because of the opportunity that this modern day convenience machine presents us, we have constructed our lives in a way that would make absolutely no sense had we not had a vehicle. Living in one city, commuting to work in another, driving across town to pick up household items.

Because of the wonder of the automobile, we have constructed our lives to involve a lot of commuting. Commuting to work, to school, to the store. We spend our days driving all over town just to take care of the basic necessities.

And because of what we have done – designed our lives in this commuter fashion – we are in a hurry to accomplish these tasks and dislike anything that gets in our ways.

But the moral of this story is that we all need to take a deep breath, and wait a few seconds to make sure the pedestrian or biker is safely out of our way. After all, we have this amazing thing called an accelerator at our feet that can take us from a dead stop to 60 mph in about 15 seconds, regardless of vehicle.